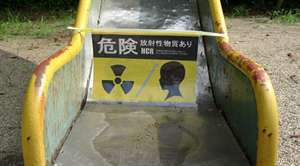 On March 11, 2011, I was sitting in my office in the Institute of Defense Studies and Analysis, when the news of massive tsunami and earthquake came. I was working as a Senior Research Fellow on a project funded by the Dept. of Atomic Energy.

I was new to Facebook, and wished safety to all my Japanese friends, and I asked some over Facebook messaging and emails if they were fine.

And then, the news of nuclear accident in Fukushima Dai-Ichi reactors flashed. Within hours, it turned into an unimaginable horror.

I almost didn’t sleep for several days – checking every detail on the internet – the radiation counts, the design details of the reactors, every single news release, the weather reports for understanding the direction and speed of wind, getting glued to the map of Tohoku region. A number of other people tracking Fukushima on the social media from different countries became friends. We kept doing that for months. Some still meticulously gather every single detail.

For me, it was a reckoning of the insurmountable nature of nuclear accidents. The accidents might not happen so frequently, but the fact that every reactor can undergo an accident and there is no human response possible for nuclear accidents, even in technologically most advanced countries, makes nuclear power uniquely and unacceptably dangerous.

The accident also revealed decades of complacency in Japan. The nexus between politics, nuclear corporations, the elites, and the media was openly exposed. We can rely on the Indian system to be far worse than Japan in that respect. The labour mafia in Japan has been callously using the poor and migrant workers as cheap fodder in Fukushima’s clean-up.

The clean-up will take decades. They have not been able to get the reactor under control, even after 5 years. We have no clue about the state of tons of molten fuel in the crippled reactor. What the government means by ‘under control’ is just that they are pouring water daily to keep the temperature in the crumbled building low. Thousands of litres of contaminated water from the reactor are coming out daily, and they have no idea what to do with the water except storing it in thousands of huge tanks and stealthily letting it go into the Pacific Ocean.

A 20-kilometre radius area around the reactor remains uninhabitable, and more than 20,000 people evacuated from this area have no hope to return.

I have been to Fukushima twice since the accident. I went inside the evacuation zone and saw the ghost towns like Namie, Futaba and Itate. Houses, offices, shops, schools, playgrounds, railway stations, everything is there, but there are no humans. In 5 years, heavy dust and moss has accumulated everywhere.

There are decontamination workers working in this 20 kilometre zone, mostly scraping the top-soil and cleaning houses and offices. This highly radioactive dump is transported, shifted from one place to other in ‘temporary’ storage sites. The people doing this work know there’s no solution. They know everything is just an eyewash, for appearance’s sake. The same company which didn’t heed to warnings before the accident, and played every trick in the book to exclude as many people as possible from getting compensation, is gaining from these decontamination contracts.

Life for the evacuated people is unimaginably hard and shattered. Building a new life is not easy for most of them. There’s very little support from the government, and there are many attempts to stop even that as the years pass. There are documented proofs that the community in Fukushima is also facing social ostracism, as people fear that radiation-caused diseases might appear after several years. People are experiencing psychological breakdowns.

The resilience of the community, and the larger Japanese society, however, is moving. People across the country are providing support in every possible manner.

The political fallout of Fukushima is historic. Something has changed in the normally apolitical Japanese society. The kind and gentle Japanese people are angry. They understand the connections between corporations, government, politicians and the media. They are still grappling with how to make their collective response more effective. Thousands of reluctant activists flock to the Japanese parliament building in Tokyo every Friday after their work, chant slogans, play music, light candles, and share dreams of a better future. This has proliferated and there are weekly protests all over Japan.

In India, we have a additional set of problems when it comes to nuclear: higher population density, deeper corruption and unaccountability in the system, absence of an independent nuclear safety regulator, attempts to dilute even the ridiculously low nuclear liability. And more than anything else, brutal bulldozing of public dissent, environmental and safety concerns as the commitment for setting up new reactors stems primarily from the elite’s foreign policy choices rather than some well-thought energy policy.

Fukushima has led to policy changes in several countries. As a BBC survey has revealed, popular support for nuclear power is touching bottom, globally.

But in India, legitimate concerns about nuclear safety are deemed superstition. The previous government sent psychological counselors to Koodankulam when local residents raised objections about the project. And when these counselors couldn’t “cure” them, the police came. Thousands of para-military forces surrounded the villages, ransacked houses and fishing boats, and killed innocents.

Asking questions has become anti-national in India. Thousands of villagers on the southern-most tip of India face sedition charges for peacefully protesting against the project, which has now revealed itself as an expensive and dangerous white elephant. In almost 3 years since its commissioning, after much fanfare and repression, Koodankulam nuclear plant has not even operated successfully for 100 consecutive days. The latest news is that the reactor has been shut down again due to a dangerous leak. People around the area have reported a pungent smell coming from the plant for the last few days.

I left my previous job and have associated myself with the Coalition For Nuclear Disarmament and Peace (CNDP) after the Fukushima accident. We have been trying to mobilise solidarity for the struggling villagers, amplify their voices and connect the dots by collaborating with civil society groups to ask questions on liability, safety, economic viability and environmental impacts of the proposed and existing nuclear plants in India.

In this country with hugely anachronistic nuclear ambitions, which is one of the handful countries with expansion plans after Fukushima, we all have been labeled anti-national.

One of the first things the new BJP government did after coming to power was to deliberately ‘leak’ an intelligence report calling CNDP and other such organisations anti-national. Some 40 names were mentioned, including mine. The IB became an economist and axiomatically said we are bringing down India’s growth by 2 to 3 percent. How more absurd can it get? I survive in Delhi on odd freelance pieces of work and minimum organisational support.

In the 5th year of Fukushima, I have lost track of the details that I started accumulating in March 2011. It’s not about facts and figures any more. It’s about politics. It’s about power structures. It’s about our lifestyles. Everything needs to be questions and transformed if the world has to be kept safe from nuclear horror and climate change.

If challenging the status-quo is anti-national, so be it. I am proud to carry the label.

On Five Years Of An Ongoing Accident In Fukushima: It’s Not An Anniversary