Violent waves crash against the shore in Iwaki, Fukushima Prefecture, as Typhoon No. 10 approaches the Tohoku region on the morning of Aug. 30.

Powerful Typhoon No. 10 struck the Tohoku region on the afternoon of Aug. 30 as expected.

The Japan Meteorological Agency has issued a warning to residents of potential record rainfall. The potent storm made landfall in Ofunato, Iwate Prefecture, shortly before 6 p.m. and was moving north-northwest at a speed of 50 kph as of 6 p.m., according to the agency. The atmospheric pressure at the center of the typhoon, known as Typhoon Lionrock outside Japan, was 970 hectopascals.

The sustained wind speed near the center was 108 kph, while gusts can increase up to 162 kph.

The storm is expected to accelerate and keep moving north-northwest, reaching areas northwest of Hirosaki, Aomori Prefecture, by nightfall. It will likely cut through the area into the Sea of Japan where it will then be termed an extratropical cyclone.

The northern part of the nation is expected to see heavy rainfall of more than 50 millimeters per hour on Aug. 30-31. With rain in some areas even likely to exceed 80 mm per hour, precipitation in northern Japan over the course of the two days could total the region’s average rainfall for the entire month of August.

Rainfall in the 24 hours until noon on Aug. 31 is expected to reach 250 mm in the Tohoku region and 200 mm in Hokkaido. The typhoon could bring on heavy rains in the region if the clouds are fed by the wet atmosphere located to the east of the nation.

As the intense rain could cause the radioactive groundwater accumulated on the premises of the crippled Fukushima No. 1 nuclear power plant in coastal Fukushima Prefecture to overflow, operator Tokyo Electric Power Co. is pumping more groundwater from the wells at the facility than usual.

The utility said that groundwater levels are still up by about 20 centimeters since Typhoon No. 9, or Typhoon Mindulle, traveled through the Tohoku region on Aug. 22.

No. 10 is the first typhoon to make landfall in the Tohoku region from the Pacific Ocean side since the meteorological agency started keeping track of the storms in 1951. 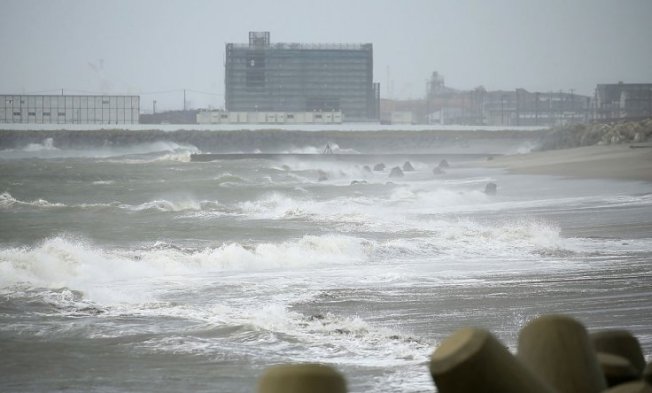 Hundreds of flights have been grounded and work suspended at damaged Fukushima nuclear reactor.

A powerful typhoon has struck an area in north-eastern Japan devastated by the 2011 tsunami.

More than 100 flights have been grounded and evacuation warning issued for thousands of people as Typhoon Lionrock reached the north-eastern Tohoku region, with wind speeds of up to 126 km recorded on Tuesday evening (30 August).

In 2011, the region was devastated by an earthquake and tsunami, damaging the Fukushima nuclear reactor and leaving more than 18,000 people dead.

More than 170,000 people were subject to evacuation, including 38,000 in Ofunato, according to the Fire and Disaster Management Agency.

Approximately 10,000 homes in the northern region were without electricity, with power lines damaged from the winds, AP reported.

The typhoon was predicted to dump about 35 cm (14 inches) of rain on the north-eastern region by Wednesday morning, more than double the average rainfall for August, Reuters reported.

Airlines cancelled hundreds of flights to and from the northern region, while bullet train services to Tohoku and Hokkaido regions were suspended.

At Fukushima, some outdoor decommissioning work was suspended as the storm neared.