We already know what is Tokyo definition of “truth”: five years and half of continuous deception, lies and cover-ups, tidbits of truth released only when forced to do so…. 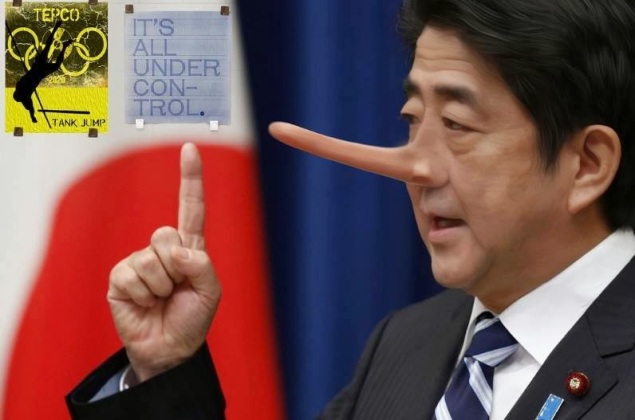 More than five years after the meltdown of the Fukushima Daiichi nuclear power plant in Japan, the legacy of the accident continues, characterized by constant radiation exposure and an ever-lasting sense of fear, not only in this island country but also beyond its territory.

Numerous reports about nuclear radiation and its damage to human bodies have been filed since the Fukushima disaster. An Asahi Shimbun article in 2014 revealed that high levels of accumulated radioactive cesium had been detected in the mud of 468 reservoirs outside of the Fukushima evacuation zone.

But more discouraging news awaits. According to a recent report by The Mainichi, an Environment Ministry survey found that high concentrations of radioactive cesium have been accumulating at the bottom of 10 major dams 50 kilometers away from Fukushima No.1 nuclear power plant, yet officials were quoted as saying that “it is best to contain cesium at those dams.”

It is the inaction that is most depressing. As people’s physical health is exposed to possible risks, the psychological fallout from the accident is worrying as well. As nuclear radiation reports are always published, people affected by the nuclear leak are fearful.

The aftermath of the Fukushima disaster that concerns the lives of millions has failed to prompt the Japanese government to assume responsibility actively on a massive scale.

Earlier this month, former Japanese prime minister Junichiro Koizumi accused current leader Shinzo Abe of lying to the international community that the situation at the nuclear power plant is under control.

Those in a position of Japanese authority should release information about Fukushima-related contamination once and for all. The government should also set up a mechanism which can inform the country and the international community of new findings in a timely manner.

As a neighbor of Japan, China has also felt uneasy with the radiation from the disaster. Years after the meltdown of the Fukushima reactors, Chinese travelers are still asking if it is safe to go to Japan. In terms of food safety, despite a ban by Chinese authorities on food imports and agricultural products from Fukushima and 11 other Japanese regions affected by nuclear contamination since the accident, potentially radiation-tainted seafood from Fukushima smuggled to China poses health threats to the Chinese people.

Since a large number of Chinese travelers are going to Japan, related information is indispensable. Therefore, China should also come up with solutions such as assigning experts to monitor the situation in Japan and offer credible advice to the anxious public. This “nuclear war without a war” will attest to the responsibility of a government to its people.

One thought on “Tokyo Responsibility to Reveal Truth of Fukushima”