25 October 2016, Tokyo – The safety and regulation of the Japanese nuclear fleet is called into serious question by the discovery of Japanese-manufactured flawed steel components installed in operating French nuclear reactors forced to shut down last week by the French nuclear safety regulator ASN, according to a new Greenpeace report. The threat to nuclear reactor safety in Japan is due to the supply of steel components to the nuclear industry from both Japan Casting and Forging Company (JCFC) and the Japan Steel Works (JSW), according to the technical report (http://bit.ly/2eMqJMm) released today by Greenpeace Japan, by the nuclear engineering consultancy, Large&Associates of London. Evidence of astonishingly high levels of excess carbon far outside regulatory limits with the associated loss of steel toughness and significant increase in the risk of catastrophic failure of primary containment components, have been discovered in JCFC-manufactured components installed in steam generators in 12 reactors owned by the French state-utility, EdF. The independent French nuclear agency, IRSN, recently warned that due to the excess carbon content, there was an increased risk of failure of the affected steam generator leading to a potential reactor core meltdown.(1) 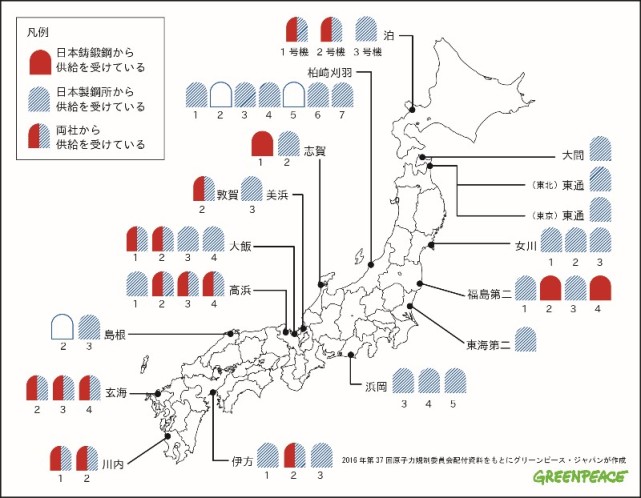 These components are so fundamental to reactor safety, and consequences so potentially severe, that in every country with nuclear reactors across the planet, nuclear regulators require that these components must not have any possibility of failure under any operating circumstance over the lifetime of the reactor – so-called “break-preclusion” for the reactor safety case. For this reason the French regulator warned its worldwide counterparts, including the Nuclear Regulation Authority (NRA) in Japan, of the potential enormity of the situation should their nuclear power plants have similarly flawed components installed.

During the period 1994-2006, JCFC supplied flawed components to France, which somehow managed to pass through the quality assurance controls of JCFC, the supplier Areva, and the French regulator to be installed in operating reactors. How the defects were not detected along the supply chain has not yet been disclosed. A commissioner from the NRA is visiting France this week to discuss the crisis.

“As a result of substandard manufacturing in Japan, citizens in France have been unknowingly exposed to the risk of catastrophic failure of critical reactor components which could result in a reactor core meltdown. Japanese-supplied steel is now at the center of France’s unprecedented nuclear crisis the scale of which has never been seen in any country. All 12 reactors supplied by JCFC are either in forced shutdown or about to be. It lacks all credibility that the Japanese nuclear industry would claim that there are no implications for the safety of their own nuclear reactors. The steel production records released in France did not reveal the scale of excess carbon, which was only found after physical testing. There are currently no plans for such tests in Japan. That is wholly unacceptable. There are many urgent questions that need to be answered by the industry and the NRA, and with full public disclosure and transparency,” said Shaun Burnie, senior nuclear specialist at Greenpeace Germany.

The French nuclear safety regulator has been investigating components supplied by both JCFC and the Japan Steel Works (JSW). Test results obtained by Greenpeace in June 2016 indicated that there was a possibility of excess carbon problem in JSW-manufactured components in the steam generator boiler pods – there are 3 or 4 steam generators in each pressurized water reactor PWR nuclear power plant, each weighs upwards of 300 to 400 tonnes and, typically, the cost of replacement is around US$130 to 150 million.

Since the French publication of the JCFC and JSW component test results, it has been claimed that JSW components are free of excess carbon. However, no tests results proving this have been disclosed and Large&Associates research raises questions over the credibility of this claim. The non destructive testing that has been conducted in France is incapable of identifying the scale of excess carbon. Large&Associatess recommends destructive testing as the only guaranteed method for proving carbon concentration.

“The fact that French nuclear reactors have been operating with flawed Japanese-supplied critical components is astounding. This is an utter failure of both nuclear regulation and on the part of the Japanese steel suppliers to meet quality control requirements. The implications for Japan may be even greater, as JSW is also implicated in this scandal because it supplies the forged steel parts that make up the reactor pressure vessel, which is the very heart of both PWR and boiling water reactors (BWR) used in Japan. Every reactor in Japan has critical components from these two suppliers and they must all undergo non destructive testing, with the priority being the two reactors currently in operation, Ikata-3 and Sendai 2, which must be immediately shutdown and tested, in addition reactors slated for decommissioning must have their components destructively tested, ” said John Large, head of Large&Associates.

The Japanese utilities are required to submit documentation to the NRA by 31 October 2016 detailing the quality of the steel components supplied by Japanese companies, JCFC, JSW and the other steel supplier, JFE. This is however only a paper exercise and not the result of actual physical testing of components installed in reactors.

Greenpeace has today sent a copy of the Large&Associates report to the NRA. A series of urgent questions will be submitted, via a member of the Japanese Diet, to the NRA in the coming days.

Priority reactors to be assessed and tested in Japan due to their status: operating, possibility of early operation or approval by the NRA for restart are: Ikata 3, Sendai 2, Takahama 2, Takahama 3&4 (under appeal by Kansai Electric); and next in line for approval by NRA – Genkai 3&4 and  Kashiwazaki-kariwa 6&7.

Notes:
(1)  The Japanese supplied components under investigation in France are designated Class 1, by which they are not permitted under any circumstances to fail during operation due to the potentially severe consequences. Specifically the components are Steam Generator tube support plates, elliptical domes, and bottom channel heads; as well as Reactor Pressure Vessel upper and lower heads, rings and pressurizers. The French governments Institute for Radiological and Nuclear Safety (IRSN) warned in August that there was a risk of reactor fuel melt down if steam generators with excess carbon operated. A maximum carbon limit is set by regulation to prevent a reduction in the toughness of the steel in the steam generators and Reactor Pressure Vessel, reduced toughness can lead to thermal shock induced fast fracture, where the steel shatters like glass. See, IRSN, 2016 2016-00275 Objet: EDF – REP – Paliers CP0, CPY et N4 – Ségrégations en carbone des fonds primaires de générateurs de vapeur – Analyse de sûreté et mesures compensatoires, 5th August 2016.