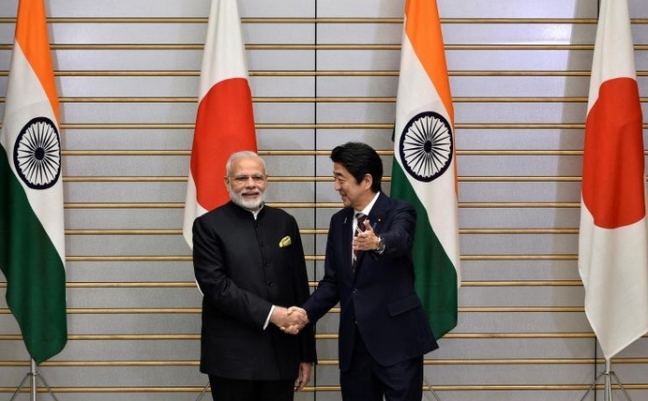 Japan and India signed a civilian nuclear accord on Friday, opening the door for Tokyo to supply New Delhi with fuel, equipment and technology for nuclear power production, as India looks to atomic energy to sustain its rapid economic growth.

It was the first time Japan, the only country to have suffered a nuclear attack, had concluded such a pact with a country that is not a signatory to the Nuclear Non-proliferation Treaty (NPT).

The accord stipulates that the nuclear fuel and equipment provided can only be used for peaceful purposes, and a separate document signed in parallel has a clause allowing Japan to terminate the pact if India conducts a nuclear test.

“As a sole nation to have been nuclear-bombed, we bear the responsibility for leading the international community towards the realization of a world without nuclear weapons,” Abe told the same news conference.

“The agreement is a legal framework to ensure that India will act responsibly for the peaceful uses of nuclear energy. It will also lead us to having India participate practically in the international non-proliferation regime.”

India says the NPT is discriminatory and that it has concerns about its two nuclear-armed neighbors, China and Pakistan.

The agreement with Japan follows a similar one with the United States in 2008, which gave India access to nuclear technology after decades of isolation.

That step was seen as the first big move to build India into a regional counterweight to China.

On India’s infrastructure development, Abe said that construction of a high-speed railway connecting Mumbai and Ahmedabad, which will be based on Japan’s “Shinkansen” bullet train technology, was scheduled to start in 2018, with commercial operation slated for 2023.

“In Japan, the era of high economic growth began when Shinkansen started its service in 1964. I hope the advent of high-speed railway will trigger fresh economic growth in India as well,” Abe said.

Modi earlier on Friday praised the “growing convergence” of views between his nation and Japan, saying strong ties would enable them to play a stabilizing role in Asia and the world.

The prime ministers of India and Japan have welcomed the signature today of a nuclear cooperation agreement between the two countries. Narendra Modi and Shinzo Abe said the agreement reflects a new level of mutual confidence and strategic partnership for clean energy, economic development and a peaceful and secure world.

The agreement between the two countries was signed during a visit by the Indian prime minister to Japan and has taken six years of negotiations. Its signature follows the signing of a memorandum on cooperation by the two leaders in December 2015. It will open the door for India to import Japanese nuclear technology. India has been largely excluded from international trade in nuclear plant and materials for over three decades because of its position outside the comprehensive safeguards regime of the Nuclear Non-proliferation Treaty (NPT).

Modi said signing of the Agreement for Cooperation in the Peaceful Uses of Nuclear Energy marked a “historic step in our engagement to build a clean energy partnership”, adding that their cooperation would help “combat the challenge of climate change”.

In a joint statement, the two prime ministers also reaffirmed their commitment to work together for India to become a full member of the international Nuclear Suppliers Group (NSG), as well as of the Wassenaar Arrangement and the Australia Group, with the aim of strengthening international non-proliferation efforts.

In a separate statement, Modi thanked Abe for his support for India’s membership of the NSG. Membership of the NSG, which seeks to prevent nuclear proliferation by controlling the export of materials, equipment and technology that could potentially be used to manufacture nuclear weapons, has up to now been limited to NPT signatories. Following the approval of an India-specific safeguards agreement by the International Atomic Energy Agency, an exception under NSG rules and bilateral nuclear cooperation deals, India formally applied to become a member of the NSG in May.