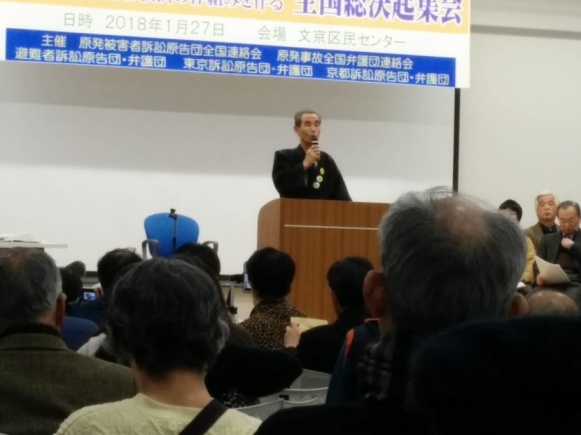 Tokuo Hayakawa at the rally in Tokyo in January, 2018.

To  The Iwaki branch of the Fukushima District Court

1 I am the thirtieth chief priest of a mountain temple which has a history of over 600 years, but the temple will pass into nothingness in my lifetime. Ten parishioners already severed our relationship. I became a chief priest in 1977 and the temple was desolated even 30 years after the end of the World War 2 because we had about 100 parishioners.

I planed reviving original religious activities and events and improvement for the environment of the temple and was satisfied with its achievement that I did most of it for three decades and several years until March 11th. Especially, the improvement of the precincts, I exerted myself and I overlapped it with my thought which I wanted to live my late life with enjoying the beauty of nature. After retirement, I was comfortable and enjoyed the nature.

I was deprived of this achievement, satisfaction and enjoyment. I was deprived of happiness which I could earn by living for it. I lost my spiritual support to live the rest of my life. What was my life?

2 I am living this way now, but there were evacuees abandoned themselves to grief and then, they comitted suicide.

I heard about a married couple who lost their jobs due to the nuclear accident and heaved sighs repeatedly in Aizuwakamatsu. They strangled their disabled son and they hanged themselves along at the railroad of the Tadami Line.

There was a man,102 years old, who said “Do I have to move from here? I want to live here. I have lived too long.” The man had a rope around his neck and hanged himself.

A cattle farmer who was a 54-year-old man committed suicide, left a message on the wall of the cattle shed in Souma “if there was no nuclear power plant.”

The nuclear accident took a job from a person who was a hundred kilometers away and took an old man’s home, who has lived a hundred-year life and forced a man to kill himself, who had no idea how to pay back his debt because he could not earn money due to a ban on the shipment of milk.

There are many other people who committed suicide.

Our defense counsel won two epochal decisions by suing for the people who killed themselves at the Fukushima District Court.

The appeal of the man whose wife burnt herself to death was admitted. After the ruling, Tokyo Electric Power Company (TEPCO) officials came to his house to apologize but they lost words because the husband rejected point-blank and said “But my wife will never return,” on the scene.

The wife lost her husband by suicide. Her appeal was admitted and officials of TEPCO went to her home to apologize. But she said “I don’t accept,” and the officials were amazed and silent.

One of the plaintiff’s statements stated that he barely stopped his suicide. I listened to all of the statements by the plaintiffs. While listening to each statement, I always presumed regrets of those who committed suicide.

3  The nuclear accident deprived all of regions and societies we lived, people’s lives and existences. We cannot ever fully recover from this problem again. We lost the places where we were born. The judges witnessed this themselves.

“If only there was no nuclear power plant,” “If only the nuclear accident did not happen.” Those words cannot pierce the heart of the officials of TEPCO. That is the true nature of TEPCO that has not changed after the accident. If they were human, these words would reach them.

Did our statements touch TEPCO? Or their hearts? I will continue to appeal until our victims’ lodgment reach the hearts of TEPCO officials. That is our regretful thought.

4  Through the trial, it became clear that the bottom cause of the accident was a top priority of profit seeking.

However, TEPCO does not admit their responsibility of the accident and, regarding our compensation, they said: “Go to law.” Can we forgive this injustice?

Originally, why did TEPCO build a nuclear plant in Fukushima? Can they explain? They cannot.

We are not only ones who are victims and evacuees by the nuclear accident and our regions are not the only victimized regions. Victims are struggling at the various regions and the evacuation areas. Among them, our plaintiffs are only forced evacuees and what rules the trial is the local Iwaki branch which is nearest court from the nuclear power plant which caused the accident. Those who will rule are the judges who live in Iwaki and have chances to meet the evacuees. We were facing the trial with feeling the significance of that. Our lawyers were aware of this profoundly.

5  “Due to the geographical and social conditions, a location of a nuclear power plant must be the place which does not have a big city in its neighboring region and the place which is sparsely populated.” (The Development Vision of the Futatba Atomic Energy District) “We confirmed that both towns of Okuma and Futaba were the best place to build the nuclear power plant. In the background that the confirmation went along well, there were facts such as that EPCO manipulated carefully after asking to build the nuclear power plant. (Coexistence and Co-evolution－With the Region－The Course of Fukushima Daiichi Nuclear Power Plant 45 years, A History of the first thirty years of Tokyo Electric Power Company)

These are the reason and the circumstance but “why must the location of the nuclear power plant be the place which is sparsely populated?” “why do they manipulate carefully?”

6  TEPCO had various big and small accidents one after the other immediately after the Fukushima Daiichi Nuclear Power Plant started business operation and they hid the accident which might become a huge accident. Whenever the accident happened, they were designated their slow report and, furthermore, they falsified and fabricated the data and so on. That situation became normal and worsen. It was no wonder that a huge accident could happen at anytime without the earthquake and tsunami. That situation lasted 40 years. That was the Fukushima Daiichi Nuclear Power Plant.

On the other hand, TEPCO circulated an enormous quantity of various handouts and brochures, providing “safety myth” as the measure to local residents. Among those, there was a brochure, titled Calm and Lively Way. Support for Futaba Vigor Life! Futaba with ties: In order to tie strongly between the power plant and residents of Futaba County forever.

They ignored the safety measure we asked whenever strange things happened to the nuclear power plant. In the same breath, they distributed the handouts like that.

7  In 1972, the Association of Naraha Town Residents was formed with the resolution: “We protect beautiful natural mountains and rivers and peaceful lives of townspeople and lives of us and our posterity.” In 1973, the same associations were formed in Tomioka and Okuma. On September in the same year the prefecture association was formed with the agreement: “We are against nuclear and thermal power plants because we cannot obtain the confirmation of safety and those plants are not true regional development and those are against people’s will.” So we, both town and prefecture people were appealing its risk.

One year after the Chernobyl nuclear accident, the organizations of anti-nuclear residents all over Japan took a leading part and they formed “The Nuclear Power Plant Problem Residential Movement National Contact Center.” Since then, in order to establish measures for safety and emergency, we proposed and negotiated with the government and each electric power company every year.

We continued to warn them with publishing a pamphlet titled “Next Huge Accident Will Be in Japan” in 1992.

8  On February, 2005, TEPCO admitted the nuclear power plants in Fukushima could not be withstood by a tsunami in the Chilean Tsunami class becuase we had accused them. But they neglected one and all of our frequented drastic measure claims. Then, the huge accident happened. The Fukushima nuclear accident was an accident that was waiting to happen. Can we deny it?

9  According to “The Result of the Root Cause Analysis” in Summary of the Fukushima Nuclear Power Plant Accident and Nuclear Safety Reform Plan, published after the accident, on March 3, 2013, by TEPCO, TEPCO says “the fact of admitting a need of tsunami protection measures leads that the power plant at that time is not safe. As a result, we were convinced that we would be required nimious measures by Nuclear Regulatory Commission and local residents.”

These things like this are TEPCO’s 40 years history. In consequence, what a huge damage we got! This is our one word “if only there was no nuclear accident.”

10  On August 5th, 2015, Naomi Hirose, CEO of TEPCO was asked the question “Do you acknowledge that the accident was a man-made disaster as a perpetrator?” He answered firmly  “Honestly, I have never thought seriously whether the accident was a man-made disaster or natural disaster until now.” On December 8th, 2016, Yoshiyuki Ishizaki, the president of TEPCO Fukushima Revital Headquarter, said to one victim “the nuclear power plant is  a necessary evil.” They made incautious remarks that they have not understood the calamity of victims and the stricken area at all four and five years after the accident.

11  We dare to bring a case before the Iwaki branch which is the closest local court from the location of the stricken area and the nuclear power plant. It is because we assure only this local court can understand suffering of victims and also they can hand down the decision which will take the part of the victims.

If this local court will hand down a decision which overlooks our actual conditions of damage and the situations of the hometown, we, victims, will not be relieved. All the more, please, the court, according to the facts and truth, hand down a decision for which we are able to hold a hope to live. We and many victims are suffering the damage that “it is impossible to verbalize.”

The Mainichi’s article is below.
Another court orders TEPCO to pay damages to Fukushima evacuees