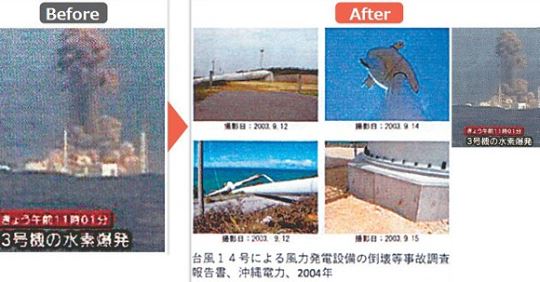 Hokkaido METI bureau requested changes to nuclear energy part of high school lecture
The image on the left shows a March 2011 hydrogen explosion at the Fukushima No. 1 Nuclear Power Plant originally used in the lecture materials, while the image on the right shows the materials after alterations had been made, adding photos of disasters from other energy sources alongside the hydrogen explosion photo.
SAPPORO — High-ranking officials from the local bureau of the Ministry of Economy, Trade and Industry (METI) requested that an assistant professor change an October 2017 lecture to high school students pointing out the dangers of nuclear power, it has been learned.
“We will review our operations so as not to cause misunderstandings,” stated industry minister Hiroshige Seko regarding the request by the Hokkaido Bureau of Economy, Trade and Industry.
The lecture at Hokkaido Niseko High School in the prefectural town of Niseko was on energy issues. The school had been chosen by the Agency for Natural Resources and Energy, an industry ministry-affiliated body, as a model for energy education last academic year, and the lecture by Hokkaido University assistant professor Sadamu Yamagata was supported by a government grant.
According to multiple sources close to the matter, Yamagata sent his lecture materials to the school beforehand to be printed, and the school handed the documents over to METI’s Hokkaido bureau at the latter’s request. Two high-ranking officials from the bureau then visited Yamagata and requested that he make changes to a section of the materials explaining the dangers and costs of nuclear power, illustrated with a photo of the aftermath of a hydrogen explosion at the Fukushima No. 1 Nuclear Power Plant.
The officials told Yamagata that this was “only one perspective” and that called it “impression manipulation.”
Yamagata added the statement, “natural energy is not necessarily 100 percent safe” along with a photo of a collapsed windmill, but did not comply with the request to change the section about nuclear energy.
“I found it uncomfortable that (the request for changes) was focused on nuclear power,” Yamagata told the Mainichi Shimbun. Hokkaido Niseko High School principal Noboru Baba said, “The lecture content was good. I don’t know if there was intrusion (by the ministry) into education.” However, residents who were aware of what had happened view the flow of events as meddling by the government in education, and the Niseko Municipal Government has held three meetings to explain the situation to locals.
Industry minister Seko told a post-Cabinet meeting news conference on April 6, “It’s common sense that the government takes responsibility for the content of an agency-commissioned program, but with the focus (by the bureau officials) only on nuclear energy, misunderstandings can arise easily.”
The incident comes on the heels of criticism of the Ministry of Education, Culture, Sports, Science and Technology for pressuring the Nagoya Municipal Board of Education by requesting a report about a lecture given by former vice minister of education Kihei Maekawa.
But how should the Hokkaido case be understood? The class taught by Maekawa was set up by the school and the Nagoya education board, completely independently of the central government. On the other hand, the Hokkaido case was funded by a central government grant, and Japan’s stance has so far been that funding gives related government bodies a say in how the monies are used.
The Hokkaido bureau’s Natural Resources, Energy and Environment Department denied intervening, telling the Mainichi, “The purpose was to show both the merits and demerits of all types of energy sources, and if the lecture had hypothetically been extremely critical of natural energy resources, the same request for alternations would have been made. If only the shortcomings of nuclear energy are presented while ignoring the benefits, that is a problem.”
However, experts are critical. Hokkaido University emeritus professor Yoichi Anezaki said, “The case of the education ministry requesting a report of Maekawa’s class was also problematic, but in this case with the industry ministry, which plays a key role in nuclear power policies, requesting that a section pointing out the issues with nuclear energy be changed, it’s an intrusion into education by authority and is much worse. It’s tantamount to censorship.”
“The belief that just because the government provided the grant, it means that it can have its say on the content of education doesn’t make sense,” said Kyoto University of Art and Design professor and former education ministry bureaucrat Ken Terawaki. “If we allow for this, then it means that it’s fine for the Ministry of Foreign Affairs to promote the Trans-Pacific Partnership and the Ministry of Defense the necessity of military affairs in the classroom. Intrusion into education is a serious matter.”
https://mainichi.jp/english/articles/20180407/p2a/00m/0na/017000c