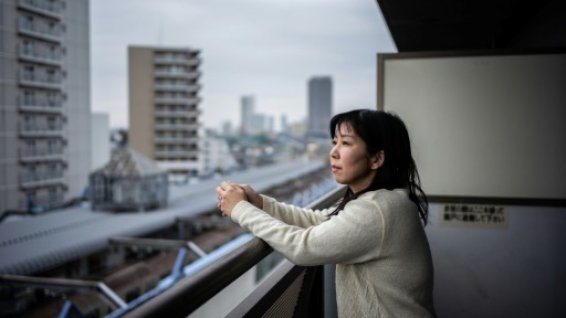 Kazuko Nihei, who fled her home in Fukushima city with her two daughters after the 2011 earthquake and tsunami, at her apartment in Tokyo

TOKYO – With Japan keen to flaunt Tokyo 2020 as the “Reconstruction Olympics”, people who fled the Fukushima nuclear disaster are being urged to return home but not everyone is eager to go.

Tokyo and the International Olympic Committee (IOC) plan to use the global spotlight from the Games to showcase the recovery of the region devastated by the 2011 nuclear disaster and the tsunami that triggered it, killing 18,000 people.

But Kazuko Nihei, who fled her home in Fukushima city with her two daughters in 2011, insists she won’t return, even though government subsidies she once received have now ended.

“I’m not wavering at all,” she told AFP in Tokyo, where she relocated with her daughters, now 11 and nine, after the disaster.

Japan ordered more than 140,000 people to evacuate when the Fukushima Daiichi reactors went into meltdown, but many others living outside the evacuation zones also opted to leave, including Nihei.

Her husband and in-laws stayed in Fukushima city, and living apart has come with emotional and financial costs.

“I have to work with every ounce of energy,” said Nihei, who works seven days a week to help keep the family afloat.

For six years, she and her daughters lived in free accommodation supported by government subsidies, but support for “voluntary” evacuees ended in March 2017.

She moved and now struggles to pay the 130,000 yen monthly rent.

But she insists she is not ready to return to Fukushima city, despite government assurances the area is safe.

Japan’s government has pressed an aggressive decontamination program involving removing radioactive topsoil and cleaning affected areas, and evacuation orders have been lifted across much of the region affected by the meltdown.

But the program has not swayed everyone, with a poll conducted in February by the Asahi Shimbun daily and Fukushima local broadcaster KFB finding that 60 percent of Fukushima region residents still felt anxious about radiation.

Nihei worries about “various health risks for children, not only thyroid (cancer) but others including damage to their genes.”

“If there was a comprehensive annual health check, I might consider it, but what they are offering now is not enough, it only concentrates on thyroid cancer,” she told AFP.

Part of the doubt stems from Japan’s decision in the wake of the disaster to alter its own standards for what it considers acceptable levels of radiation exposure.

It changed the level from 1 millisievert (mSv) a year to 20 and says that level of exposure carries far lower cancer risks than smoking or obesity and “can be comparable to the stress from evacuation”.

The International Commission on Radiological Protection sets a maximum dose of 1 mSv/year in normal situations and a range of 1-20 mSv/year in post-accident situations, though it has urged Japan’s government to choose a target at the lower end of that range.

Despite the uncertainty, Fukushima prefecture plans to end almost all housing subsidies by the end of March 2021, with a goal of having no evacuees by the time — a target some fear will have disastrous results.

2 thoughts on “Fukushima evacuees resist return as ‘Reconstruction Olympics’ near”