A crane hoists a dismantling mechanism to the top of an exhaust stack at the Fukushima No. 1 nuclear power plant site. 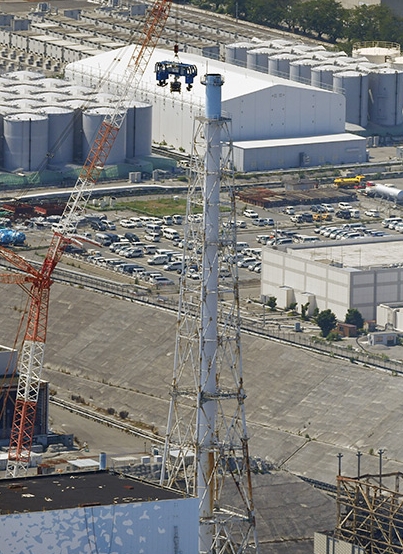 Work begins Aug. 1 to dismantle an exhaust stack at the Fukushima No. 1 nuclear power plant site. 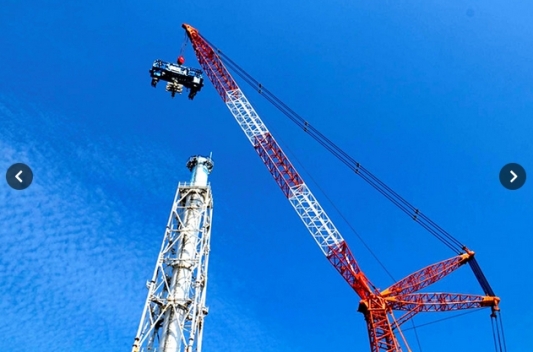 A crane lifts a dismantling mechanism toward the top of an exhaust chimney on the Fukushima No. 1 nuclear power plant site
August 2, 2019
Delicate work got under way Aug. 1 at the crippled Fukushima No. 1 nuclear power plant to dismantle an unstable exhaust stack that is so highly contaminated by radiation the task must be done by remote control.
Initial plans had called for the work to start in March, but the project was delayed by a failure among other things to confirm design plans that led operator Tokyo Electric Power Co. to deploy a crane that was not up to the task.
The exhaust stack, which is 120 meters tall and 3.2 meters in diameter, was used for the No. 1 and No. 2 reactors.
The work is regarded as a crucial phase in the decommissioning of the plant, a task that is projected to take decades and cost billions of yen.
When the nuclear disaster unfolded in March 2011, vapor containing highly radioactive substances was released through the stack. Metal poles used to support the chimney were found to have been damaged following a hydrogen explosion at the No. 1 reactor.
Radiation levels around the base of the stack are believed to be still too high for humans to work in, so the dismantling work must be done by remote control.
There are also concerns that the chimney could collapse. TEPCO plans to dismantle the upper half of the structure by the end of the current fiscal year.
A remote control room was set up in a large remodeled bus located about 200 meters from the site. Workers will operate the special cutting equipment while watching footage from 140 video cameras.
Immediately after the triple meltdown at the Fukushima No. 1 plant, radiation levels at the base of the chimney exceeded more than 10 sieverts per hour. In 2015, radiation levels still hovered at 2 sieverts per hour, the highest among all outdoor areas of the plant.
A 750-ton crane is being used to hoist the dismantling mechanism over the exhaust chimney.
The work was supposed to begin around 7:30 a.m. on Aug. 1 with the cutting of ladders and electric cables at the base of the chimney. But some of the equipment did not function properly because of problems with a telecommunications system.
Work finally started around noon.
From Aug. 2, the dismantling mechanism will be used to slice parts of the chimney from the top. The dismantled pieces will be stored in the grounds of the Fukushima No. 1 plant.
Although plans call for dismantling the upper part of the stack by the end of March 2020, strong winds and other weather conditions could cause delays.
The dismantling mechanism was developed and is being operated by construction company Able Co., based in Okuma, Fukushima Prefecture, where the Fukushima No. 1 plant is located.
It is unusual for a local company to be involved in such a key project on-site, but a company official said, “As a local company, we want to respond to the expectations of the local community by successfully completing the project without incident.”
http://www.asahi.com/ajw/articles/AJ201908020037.html