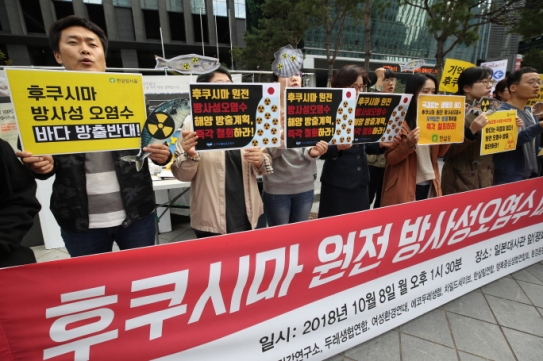 South Korean environmental activists hold a rally in front of the Japanese Embassy in Seoul on Oct. 8, 2018, to protest against Japan’s decision to release the Fukushima nuclear plant’s radioactive, contaminated water into the sea.
October 4, 2019
SEOUL, Oct. 4 (Korea Bizwire) — As Japan seeks to release contaminated water from its disabled Fukushima Daiichi Nuclear Power Plant into the Pacific Ocean, South Korean media revealed that the tainted water contains hazardous radioactive materials.
KBS News reported on Thursday that a report submitted by the Tokyo Electric Power Co. (TEPCO) to the Japanese Ministry of Economy, Trade and Industry early this week confirmed the presence of the hazardous radioactive materials, such as cesium and strontium, in the contaminated water.
The report said that cesium, strontium, and iodine 129 exceeded standard levels in 82 percent of all contaminated water kept in Fukushima as of October of last year.
It was also revealed that 17 percent of the tainted water emitted radiation that was ten times stronger than the annual limit on radiation exposure (1 mSv/Y), while 7 percent of the water contained radioactive materials that were 100 times stronger.
In an interview with KBS News, a TEPCO official said that “problems with the filters and several systems in the water treatment facility prevented it from being run at full capacity for a certain period.”
TEPCO said it can no longer accommodate the contaminated water that is being produced every day since the East Japan Earthquake in 2011 and has proposed a plan to release it to the atmosphere or the sea.
Roughly 170 tons of contaminated water is being produced at the Fukushima Power Plant every day. As of last July, the total amount of tainted water had reached 1.15 million tons.
The Japanese government, in contrast, has been claiming that the water now only contains tritium, a radioactive hydrogen isotope known to exist in the natural environment.
Neighboring states, including South Korea, are strongly opposing the idea of releasing the water, since it may cause secondary damage.
“The International Atomic Energy Agency understands the issues and concerns that we face. They are also keeping a close watch on the matter,” said Uhm Jae-sik, head of the Nuclear Safety and Security Commission.
http://koreabizwire.com/japanese-report-confirms-hazardous-radioactive-materials-contained-in-contaminated-fukushima-water/145399