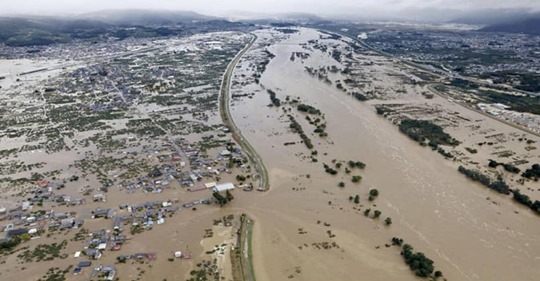 October 16, 2019
News outlets worldwide are reporting that at least 66 residents of Japan have died as a result of Typhoon Hagibis. Our hearts reach out to the people of Japan and the families of the deceased.
The news coverage from Reuters caught our attention due to its research that Fukushima Prefecture was apparently the region hardest hit by the typhoon. According to the Reuters story entitled: Rescuers slog through mud as Japan typhoon death toll rises to 66:
“The highest toll was in Fukushima prefecture north of Tokyo, where levees burst in at least 14 places along the Abukuma River, which meanders through a number of cities in the largely agricultural prefecture. At least 25 people died in Fukushima, including a mother and child who were caught in flood waters, NHK said…. Residents in Koriyama, one of Fukushima’s larger cities, said they were taken by surprise by the flooding. Police were searching house-to-house to make sure nobody had been left behind or was in need of help.
“The river has never flooded like this before, and some houses have been completely swept away. I think it might be time to redraw hazard maps or reconsider evacuation plans,” said Masaharu Ishizawa, a 26-year-old high school teacher …”
Fukushima prefecture is very mountainous and largely remote. The radioactive fallout, which spread throughout Japan after the three Fukushima nuclear meltdowns in 2011, is impossible to clean up in these inaccessible mountainous areas that lie throughout Fukushima Prefecture. Even in populous Tokyo, more than one-year after the meltdowns, Fairewinds’ research identified randomly selected Soil Samples Would Be Considered Nuclear Waste in the US, which we discussed in the video on Fairewinds’ website.
It is our belief from our ongoing research that the ensuing flooding induced by Typhoon Hagibis is moving significant amounts of radiation from high in the mountains down to cities, towns, and farmland in Japan. Our analysis on several radiation sampling trips to the prefecture proves that there are huge amounts of residual radiation that were previously trapped in the soil.
Now, due to the heavy rain, subsequent river flooding, and burst levees (dams) this radioactive soil is moving and being pushed from the mountains down into more populous areas where people live and crops are grown. Once again it appears that government authorities and rescue organizations are ignoring this new, long-term threat, or have not been apprised by the JAEA (Japan Atomic Energy Agency) and nuclear power industry of the monumental health risks involved.
https://www.fairewinds.org/demystify/brief-fukushima-prefecture-update?fbclid=IwAR0wKRWAyvDSUkTy8V8fd5ZFPXRLOnNSENlaDn2Ms3kB9lq5mtXG

2 thoughts on “At Least 14 levees broke in Fukushima Prefecture”