Tokyo may dump contaminated water as early as September 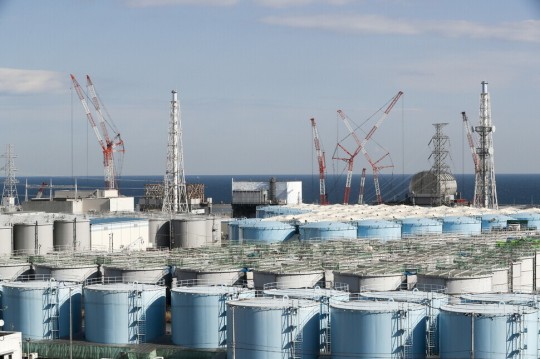 During the past three months, while the international community was focused on the COVID-19 pandemic, the Japanese government has held five public hearings as it moves forward with its decision to dump radioactive water from the Fukushima nuclear disaster into the ocean. After analyzing the transcripts and videos from the hearings, the Hankyoreh has concluded that the Japanese government will probably decide to dump the water as early as September or October, despite overwhelming public opposition to the plan, even in Japan. Since a study has found that the contaminated water could reach the eastern coast of South Korea within a year of being dumped, international groups focusing on the environment and experts in international law are calling for the South Korean government to take preemptive action in the area of international law.

Following an explosion during the 2011 Tohoku earthquake, the Fukushima Daiichi nuclear power plant was closed and is being decommissioned, a process that has taken nine years so far. But debate continues about how to deal with the growing volume of water contaminated with radioactivity, including the water used to cool the nuclear fuel and rainwater and groundwater that have seeped into the buildings. The contaminated water is currently being stored in tanks, but by the summer of 2022, the Japanese government says, the tanks will run out of space, necessitating the water’s release into the ocean.

The Japanese government, under Prime Minister Shinzo Abe, held video hearings about how to deal with the contaminated water on Apr. 6, Apr. 13, May 11, June 30, and July 17. These hearings were attended not only by representatives from the fishing, agriculture, and hospitality businesses and community leaders from Fukushima Prefecture but also the national tourist council and groups representing businesses and consumers. The government was represented by officials from 10 or so ministries, including the Ministry of Economy, Trade, and Industry, the Ministry of the Environment, and the Ministry of Foreign Affairs.

Radioactive matter detected in water even after decontamination

While reviewing the hearings, the Hankyoreh learned that radioactive matter has been detected even following decontamination efforts, that releasing the water would likely cement Fukushima’s stigma as an area tainted with radioactivity and have a serious impact on the fishing industry, and that there was widespread opposition to the idea among hearing attendees, who argued that the final decision shouldn’t be made until public opinion has been canvassed.

An August 2019 report by international environmental group Greenpeace about the contaminated water at Fukushima found that the water, once released, would flow through the East China Sea and be brought via the Kuroshio Current and the Tsushima Current to South Korea’s eastern shore within a year. Disregarding the concerns of the international community, the Japanese government released a draft of a plan this past March to dump the contaminated water at Fukushima into the ocean over the course of 30 years. Given the plan’s schedule, which involves the construction of a facility to dilute the contaminated water, its decision will likely be made by this October. Abe told the press in an interview in March that he wants to finalize a plan as quickly as possible.

The Japanese government intends to make its final decision after canvassing the opinions of Fukushima residents, related organizations, and ordinary citizens. But even in the Japanese public, there’s fierce opposition to dumping the contaminated water. The Hankyoreh’s analysis of the transcripts and videos from the five hearings show that most of the 37 participants were concerned about the plan to release the water.

“It’s human nature to avoid radioactive materials. It’s a serious problem that there’s still radioactivity even in the decontaminated water, which contradicts what TEPCO [Tokyo Electric Power Company] initially said,” said Hidenori Koito, the director of a trade association for the hospitality industry in Fukushima Prefecture.

TEPCO claimed to have filtered out 62 kinds of radioactive material through the Advanced Liquid Processing System (ALPS) and all that’s left is tritium, which is technically difficult to remove from the contaminated water in the tanks. But a 2018 study found that 80% of the water processed using ALPS still contained more than the permitted level of radioactive matter that is deadly to the human body, including cesium, strontium, and iodine. While TEPCO has emphasized that it would decontaminate the water once more to ensure its safety prior to release, distrust has already surged.

Another criticism is that dumping the water would spoil the nine-year campaign by Fukushima residents to repair the area’s reputation. “If the contaminated water is released into the ocean, people will inevitably think there’s another radiation leak at Fukushima, given the nuclear accident that occurred there,” said Kimio Akimoto, president of a coalition of forestry associations in the prefecture.

An even sterner stance was taken by fishermen, who depend upon the ocean for their livelihood. “It’s unacceptable for radioactive matter to be deliberately pumped into the ocean,” said Tetsu Nozaki, president of a coalition of fishery cooperatives in Fukushima Prefecture. The national coalition of fishery cooperatives voted on July 23 to “oppose” the planned release of contaminated water.

There are also concerns that the government is rushing the plan. “The Japanese public doesn’t know the details about the contaminated water yet. The final decision shouldn’t be made until people understand what it means to dump contaminated water into the ocean,” said Yuki Urago, secretary-general of a national coalition of consumers’ associations.

“Right now, the Japanese public is focused on COVID-19. It’s doubtful whether the issue of contaminated water at Fukushima can provoke a national debate in this situation,” said Yuko Endo, mayor of Kawauchi, a village in Fukushima Prefecture.

Before deciding on important policies, the Japanese government has a practice of canvassing opinions, a process known as the “public comment” period. The relevant ministry here, the Ministry of Economy, Trade, and Industry, began collecting comments on Apr. 6 and took the unusual step of extending that period three times, only wrapping it up at the end of last month. One reason the government may have extended the comment period is because of the overwhelming opposition to releasing the contaminated water into the ocean.

Last month, the UN Human Rights Council released a statement expressing “deep concerns” about “a report indicating that the Japanese government is accelerating its timeframe for releasing water contaminated with radioactivity at Fukushima.” South Korea, given its proximity to Japan and the ocean, has set up a government-wide task force under the Office of the Prime Minister to keep tabs on the Japanese government’s actions.

“We’re asking Japan to share adequate information while it’s processing the contaminated water at the Fukushima nuclear plant. We’re monitoring the situation from various angles to see what impact this will have on us,” explained an official from South Korea’s Ministry of Foreign Affairs.

One thought on “Japan pushes forward with plans to dump radioactive water into ocean, despite public opposition”