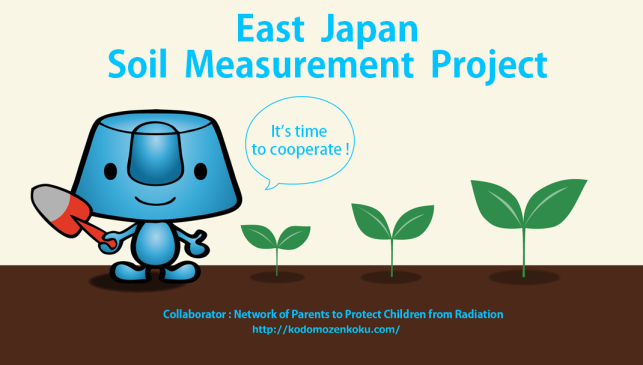 When we started up MDS (Minna no Data Site, Everyone’s Data Site) we constructed inclusive and shared system on measuring data of food as the first stage, as there were many people who were concerned about food intake.

However, we planned to launch the measuring data of soil as a second stage after intensively equipped the system on food.

In autumn 2014, after one year from opening of MDS, we start up to platform soil measurement data. We, as citizens, try to start to map the status of soil contamination spread over East Japan.

The following is the reason why we stand up to start the East Japan Soil Becquerel Measurement Project. Objectives, outline and methodology of the project is explained.

In the Project, the method of collection is standardized in order to make comparison of data from multiple measurement laboratories. The Manual for Collection is developed by considering the easiest method of measurement within the limits of keeping accuracy, because many citizens conduct collection and measurement by themselves.

Collected soil is measured by the participating measuring laboratories of MDS. The result becomes open to the public and the report is sent to the collector.

Radioactivity contamination by the accident of Tepko Fukushima Nuclear Power Plant is long term lasting.
The soil contamination map of broader areas is needed to understand contamination of neighborhood by measurement and comparison of data.

Though central and local governments conduct soil researches, those researches are insufficient because the value is lower by measuring deep place, or they measure only air dose.
As they decide the spot of measurement by mesh, the data what citizens want to know is lacking.

In our Project, we aim to grasp status of contamination where citizens make living every day. For example, place where children frequently play, where people pick wild grass, or where farmers work is being measured.

The Project aims that people can access necessary information as much as possible by utilizing data and database and by accumulating information which one can find at a glance and can search at ease.
We hope the result would be used as a tool for action for everyone.

■ The depth of collection is from 0 to 5 cm, because most of cesium stays within 5 cm from surface of the earth.

Collection of soil should be conducted when it does not rain for several days, in order to avoid weight error caused by water. Less than 10 percent of moisture content is desirable.

■ Spot for collection is set at higher dose spot by measuring rate of air dose (1m、5cm).
The extreme high spot such as micro hot spots and concentrated environment are excluded.

■ Collection is made by a method to compare results of each place.

■ Samples are measured at the participating laboratories of MDS.

・Measurement accuracy of those laboratories is ensured by the MDS original examination.

・The results are accumulated in the common database.

■ The result sof measurement are open to public on MDS. MDS has Japanese and English site.

■ Mapping of data is planned after gathering enough results.

■ Trial calculation of amount of radioactivity by a square meter is planned to be conducted. (Becquerel/ Kg →Becquerel /square meter)

The project activity will be made starting from requested districts. Individuals, groups and any organization such as school and daycare can participate in measurement of proposed spots. Proposing more than 5 spots are desirable.
The measurement spots will be decided after consultation basically in the same municipality.

★ How to support us：
Collection of samples, payment of 2,000yen for measurement of one sample, payment of actual postage for samples.

★ How to feed back :
Sending result of measurement of the spots including spectrum, Reading and downloading data at MDS.

Support our site and project!
To those of you who are viewing this site from overseas, Thank you for visiting ”Minna no Data Site” (Combined Database of Independent Radioactivity Measurement Labs) .

MDS has stacked the data measured by the independent radioactivity measurement laboratories in response to the Fukushima Daiichi nuclear power plant accident, As of September 2014, the number of the food data became nearly 10,000.

For the benefit of those who worry about radioactive contamination of Japan from overseas, we opened the English site. We have started “East Japan soil measurement project” since October 2014 in addition to the food data.

From the fact that government has not done the adequate soil contamination survey for the citizens, this project promotes measuring soils of the places like parks, vacant lots, and educational facilities which are closely related to children’s daily life.

This project is based on the method of “Iwate soil measurement project “(2012- 2013) by citizens of Iwate Prefecture. If the method for collecting the soil is different, the results of monitoring vary greatly.

By using an easy-to-understand manual of the standardized method, you are able to compare, review and analysis the data from different locations. We will publish the measurement results of soil on this site.

We record the status of the radioactive contamination of Japan carefully from the standpoint of citizens, and hope that it will help people who are living with anxiety. For the people overseas, we are preparing the English version of data to show where and how much radioactively contaminated.

To run this project, big budget for measurement cost and update cost of web systems are required. There are 300 locations in each 17 prefectures in Eastern Japan, and each place costs about 4,000 yen.
Although it is planned to reduce costs and to ask for volunteers as much as possible, still the costs such as measurement costs, project management costs and Web systems costs are expected to some extent also.

It is a project of the scale that no one even challenged yet. We rely on your generosity to help funding for this project. We would appreciate your support from abroad. Thank you for your cooperation and support.

The information page of “East Japan soil measurement project” is currently in preparation. It will be published shortly.

Remittances in either USD or EUR can be made from overseas banks,.
Please note that remittances to Japan cannot be made from certain financial institutions.
For details, please ask your local bank.