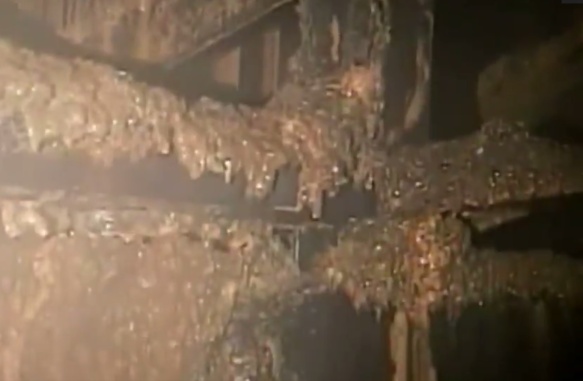 Fukushima Blog by Pierre Fetet
Translation Hervé Courtois
It has been almost seven years since this deadly magma was created thanks to the imbecility of men. 7 years that we talk about it without ever really seeing it. And now Tepco, in January 2018, unveils, for the first time and in a very discreet manner, some very telling images of the corium of Fukushima Daiichi’s reactor 2.
Above illustration: screenshot made from a Tepco video
At first, all the media published again the photos provided by Tepco, where one sees for example a piece of a fuel assembly’s handle. It was deduced that the rest had melted but nothing more could be said.
In a second time, 3 days later, Tepco added a video of 3 minutes 34 that shows a selection of footage filmed inside the containment. In this video, we see very precisely corium flows that have solidified on metal structures under the reactor vessel.
The camera that filmed this hyper-radioactive material was designed to support 1000 Sieverts. But this device can not hide the ionizing radiation that forms many random clear points on the film.
The men who manipulated the probe outside the containment were certainly irradiated because the dose rate is still very high in the reactor. But Tepco has not yet released this information.
To summarize in images what happened in March 2011, the corium of reactor 2 passed through the reactor vessel, then made a 1 m wide large hole in the platform just below the reactor vessel: 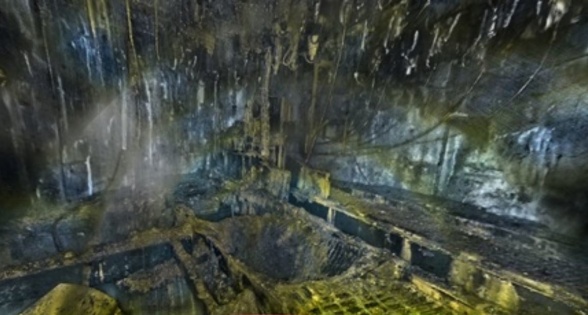 Source Tepco
Then it continued on its way encountering obstacles, forming stalactites in various places: 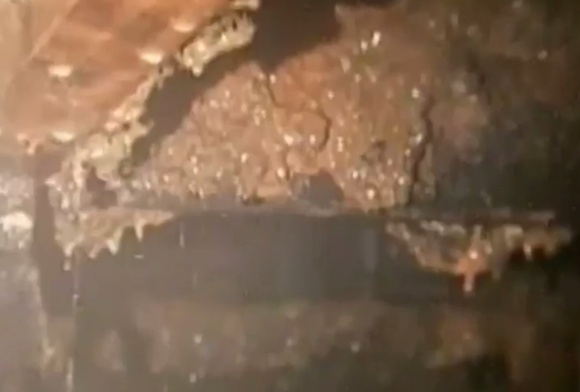 Screenshots of the Tepco video
Finally, it spread to the bottom of the containment by cutting into the concrete. And there, we lose track because the investigations could not go further.
Has it gone far off the ground plate ? Did it join the toric pool by the pipes connecting the enclosure and the pool?
Let’s not forget that an explosion was heard by technicians on March 15, 2011 at 6:10 from reactor 2. Steam explosion?
Do not forget that the water that is injected continuously to cool the corium does not fill the enclosure because it is no longer intact.The water is permanently contaminated by the corium, before reaching the bottom of the plant and the groundwater. Let’s not forget that this moving groundwater flows into the Pacific, despite the ice wall, which is not perfectly watertight.
It will be observed that Tepco has not yet dared to provide a picture of the hole in the reactor vessel. It’s like the explosion of reactor 4, there are things that are better not to be disclosed because they tarnish the image of civil nuclear.
In the same manner, the people in charge of communication preferred to broadcast uncertain images on the 19th of January rather than these very interesting images which I extracted from the video.
Here is the video : https://www.youtube.com/watch?v=yTWCUOz8mYE

Certainly, robotics in a radioactive environment has made real progress, but that hides the reality: we have not yet invented the machines that can dismantle the Fukushima Daiichi nuclear plant. And the forty years promise to complete this dismantling will certainly be insufficient.
Let’s not forget that there are all in all 3 coriums to recover and 3 swimming pools full of fuel to empty.
While Tepco “amuses” us with its technique, Tepco hopes to release 1 million tons of radioactive water in the Pacific that it has collected on the site, as if this ocean had not already suffered enough. It also makes it possible to forget the thousands of people suffering from thyroid disorders or other various pathologies due to radioactivity and the tens of thousands of displaced people who are being forced to return to contaminated territories.
Let’s wait for the big communication from TEPCO: the athletes of 2020 (Tokyo Olympics) must be amazed by the Japanese hyper-technicality so as to forget the basic dangers of ambient radioactivity.
http://www.fukushima-blog.com/2018/01/le-corium-du-reacteur-2-de-fukushima-daiichi-est-bien-visible.html